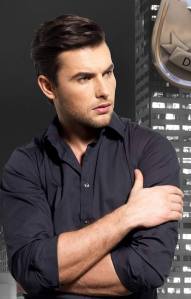 Welcome to my interview with the most delicious werewolf detective we have in the USA today.

Tell us your name and what you do for a living?

CS: My name’s Colton Scarber, I’m a detective with the Dallas Police Department.

You’re an Immortal, how long have you lived?

CS: I was born about eighty years ago. Wolves tend to mature very quickly, then we remain basically the same for a long time. After maturity we age very slowly.

When was the last time you were in Wolf form?

CS: I’m not a Shifter, I can only change with the cycle of the moon. Before we had to take the Undead Oath, and not prey on humans, we would take our Wolf form in order to hunt. We don’t need to do that anymore, so we usually change as a way to relieve stress and to pay homage to our ancestors, who did have to hunt that way. Plus… [Colton begins to mumble.] It’s the only way we can reproduce.

Excuse me, did you just say it’s the only way you can…mate?

CS: Some Wolves are born, others are bitten. I’m a born Wolf. But it’s only in our Wolf form that we can procreate.

Tell us the truth, do you really howl at the moon or is that a myth?

CS: I howl at the moon, the sun, the clouds in the sky, or at the newspaper. It’s a perfectly natural way that Wolves show their emotions. Most people don’t like it too much, though.

CS: Yup. I’ve been married a few years now, to my lovely mate Becca. Married legally, that is, as well as within our pack.

[nervous giggle from interviewer]: Are cats scared of you? I mean, after all, you ARE a dog, though I must admit you’re a handsome one.

CS [laughs]: There’s no love lost between Wolves and cats. Cats are just…creepy. I remember this one time, I was interviewing a witness who had cats. This one cat just kept wiping its face all over my hands. I asked the witness what was wrong with it, and she said, “He likes you. He’s just scent-marking you!” Like I said, creepy!

What do you think of having a Vampire boss?

CS: At first, I wasn’t sure about it at all. I mean, after all, we had history, in a way. My pack killed her entire family. When they first partnered me with her, I thought it was going to be trouble. I didn’t know that she was unaware of the connection. When she found out…wow. But I won’t talk about that.

Why did you become a detective? I’ve been told in history that each type of Immortal looks after their own?

CS: Well, in a pack, there’s always a hierarchy. That way, every Wolf knows his or her place, and that includes their roles. We like the strict rules because we know that breaking those rules will bring down immediate punishment. So, I guess, I saw the police department as an extension of that. Pack or not, everybody needs to follow the rules.

Do you have any kids, or should that be puppies?

CS [growls at interviewer’s stupidity]: Yes, Becca and I have five. We call them kids or pups. They’re about 6 months old now, and getting into all sorts of trouble while I’m at work! Becca’s a stay at home mom. Even if she’d had a job before, she would have wanted to stay home. Pretty soon they’ll be ready to start school, and their required anger management classes.

How can you live in a city and not feel enclosed?

CS: Wolves are used to living in a pack situation. We love the city! My apartment building is entirely tenanted by Wolves, and I like it that way. We tend to stay close to others of our kind, even if they may not be from our pack.

If you were the boss, who would you pick as your partner?

CS: Fortunately, I’m not an Alpha, so I don’t have to make those kinds of decisions. But after working with Detective Anderson for a while now, I’d have to say we kind of complement each other. It seems like we’re two sides of a balance or scale. So I’m not sure there’s anyone else I would rather be partnered with.

Tell us something about a Werewolf that we don’t know.

CS: [Leaning forward, his hand touching her arm] We can get fleas.

Fleas, oh my god, get your hand off me, oh yucky, now you’ve made me all itchy….she shrieked dashing from the news studio.

CS:  [Looks into the camera with a smile] I was just kidding!

This site uses Akismet to reduce spam. Learn how your comment data is processed.